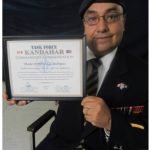 What mission did he served on prior to 2001 that would support his wound stripe claim, you know the thing on his cuff that looks suspiciously like a cut down Private’s hook… 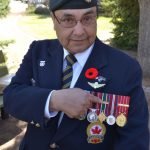 Qualified Military Parachutist – No record
Member of the Canadian Airborne Regiment – No record but, he has the tattoos!
Qualified CQB instructor – No record.