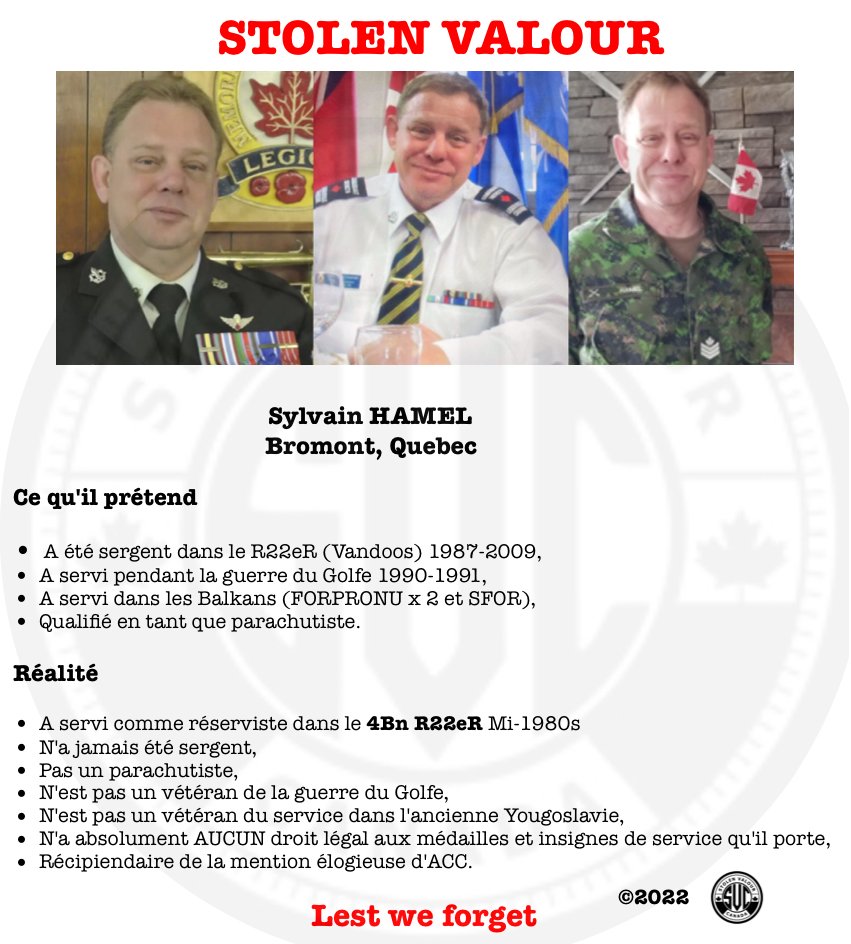 We were asked to review a number of photographic images of retired “Sergeant” Sylvain HAMEL of the R22eR who resides in Bromont, Quebec.

The Persian Gulf and Kuwait (PG&K) Medal with bar became the focus of research as not one individual could vouch for his service in the operational theatre between September 1990 and March 1991.

So, where was Hamel during the December 1990 to March 1991 time frame?
He wasn’t in Doha, Qatar guarding our air force assets with Cie C 1er R22eR nor was he chasing Scuds with another recently exposed Gulf War fake. Like everyone else, military or civilian, he was probably watching events unfold on the 24 hour news channels.

IAW our well established SOP, we contacted Hamel via email on 25 Mar 2022 in order to provide him an opportunity to sort out the reported situation.  He chose not to respond however, he immediately scrubbed his social media pages by removing every image of him wearing CF uniforms, medals and insignia.  Hamel also resigned from his position as 1st Vice President a Royal Canadian Legion “Quebec Command” effective 28 Mar 2022.

Now, why would a legitimate veteran do that?

The rest of the story

The Special Service Medal (NATO) is conspicuously absent from his group of medals. Interestingly, had he actually served in Canadian Forces (Europe) he would have been awarded this medal like every member of C Coy, 1st Bn R22eR who deployed to Qatar.

The Canadian Peacekeeping Service Medal, UN Protection Force (UNPROFOR), NATO (Former Yugoslavia) Medals and the Canadian Forces Decoration (CD) are as questionable as the basic parachutist wings he wears. The situation is further confused as Hamel also wears the ribbon of the UN Mission in Bosnia-Herzegovina (UNMIBH) which is a separate and distinct mission from UNPROFOR. The ribbons aren’t interchangeable!

Mr Hamel should have publicly apologized for claiming to be a decorated Infantryman with 22 years of service including deployments to the Persian Gulf and in the former Yugoslavia.

He should have surrendered the uniforms, medals and insignia that he wore without lawful authority for appropriate disposal action.

Those actions may have saved him a visit from law enforcement authorities carrying a copy of s419 of the Criminal Code of Canada. However, we’ll now wait for the outcome of the ongoing police investigation (file number # 003 Dunham SQ.)