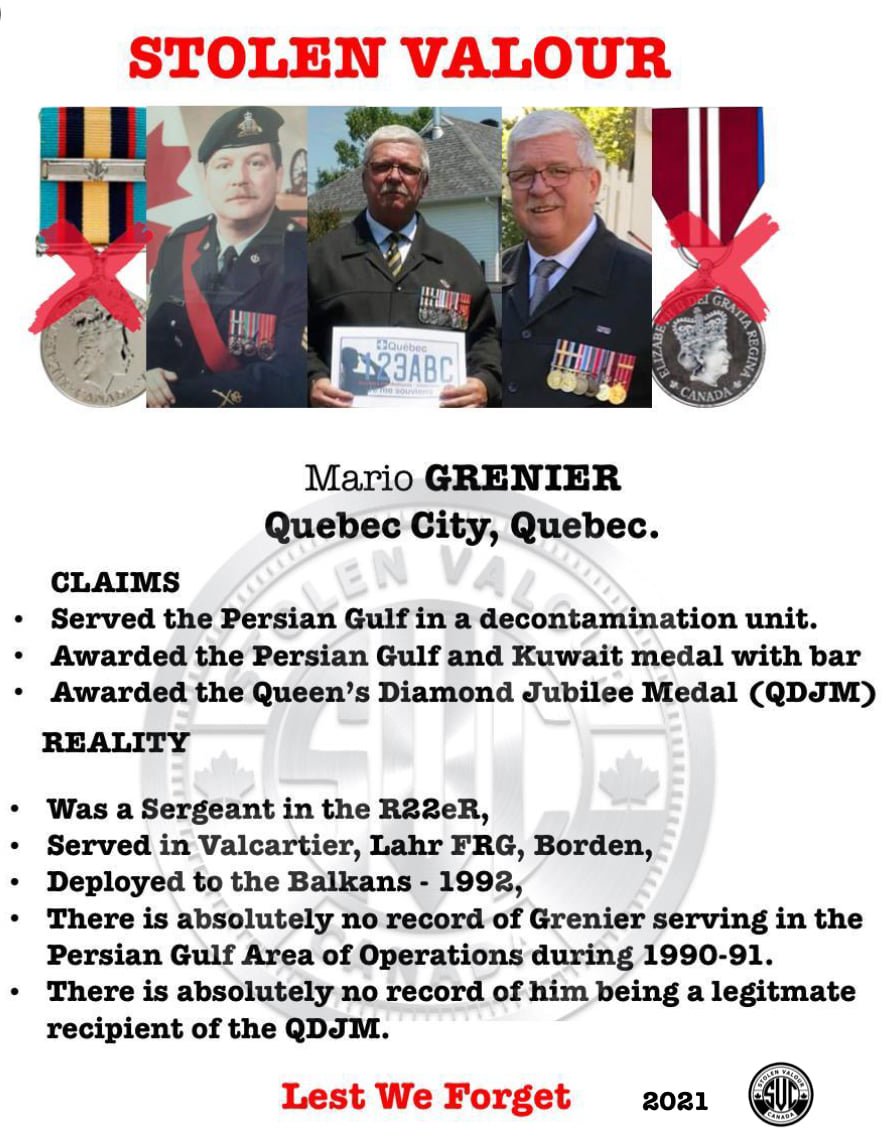 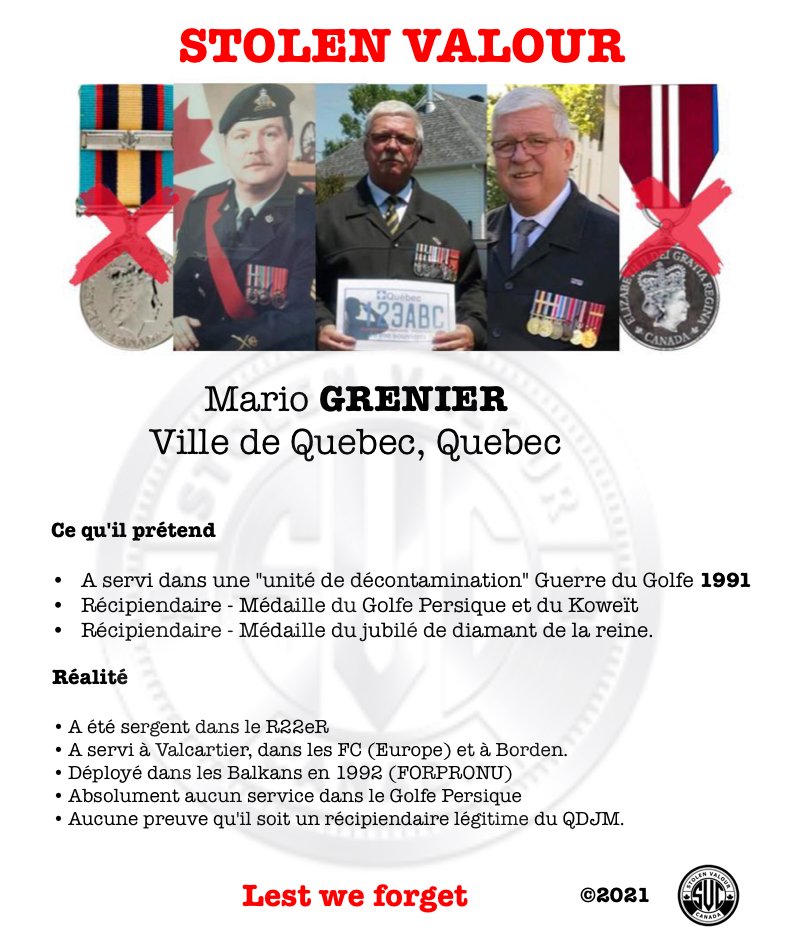 We were asked to review a number of photographic images of retired Sergeant Mario Grenier, a self appointed veterans advocate  and former infantryman with the R22eR who resides in the Quebec City area. His service in Canada, Lahr Germany and operational deployment to the Balkans in 1992 were quite easy to confirm. 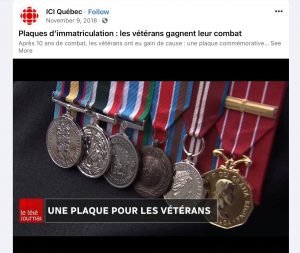 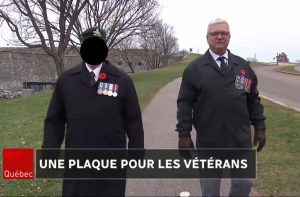 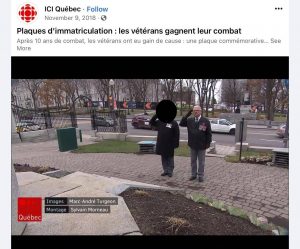 However, The Persian Gulf and Kuwait (PG&K) Medal with bar he wore at every occasion became lightning rod for comments as not one individual could vouch for his service in the operational theatre between September 1990 and March 1991.

Grenier has claimed that the United Kingdom awarded him the Canadian PG&K Medal with bar. Now why would they do that? If he was, in fact, attached to / on exchange with the Brits, would he not have received the UK Gulf Medal like the other CF members in that situation?

All the Canadian Forces recipients of the UK Gulf Medal and they are known / gazetted and Grenier isn’t among them. DH&R name two of the recipients in the publications, while the UK Ministry of Defence have confirmed via a Freedom of Information request that there are a dozen CF recipients of their medal. 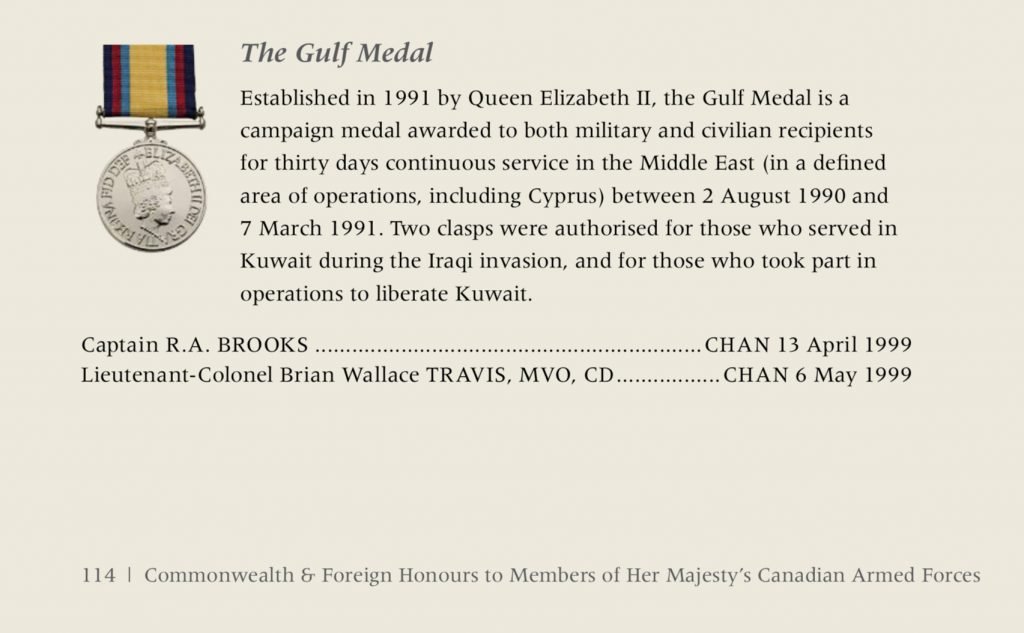 It seems Grenier has been telling different stories to different audiences, he has absolutely no GW1 service despite his fairy tales of being attached to 23 (UK) Engineer Regiment for a 20 day period  (8-28 February 1991) and was tasked along with another Canadian from Ontario on a secret mission to run down SCUD missiles in Riyahd! 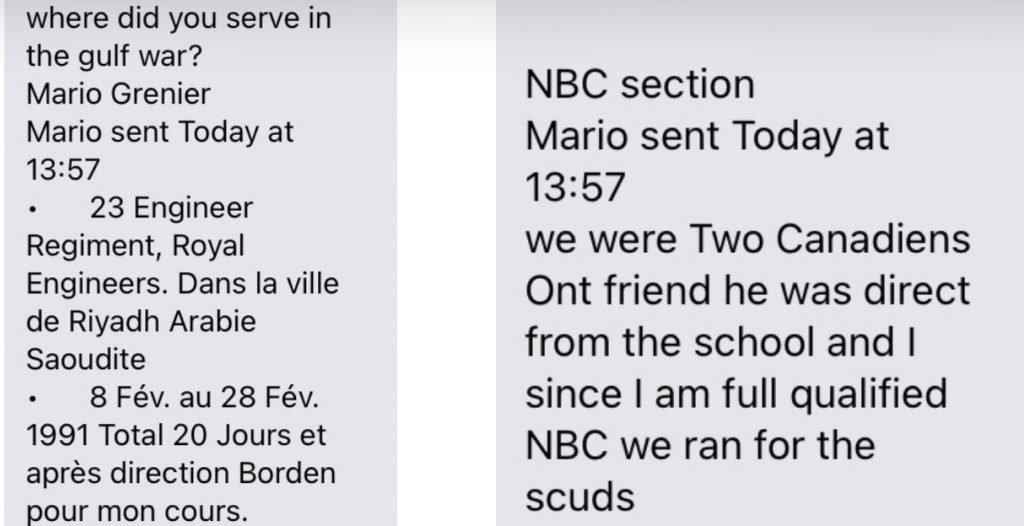 Of course, Grenier followed a routine that is quite familiar to us shock, anger, immediately scrubbing all of the images of him wearing the PG&K medal (and the QDJM) from his social media accounts (November 2020), indignation followed by feigned cooperation, the inevitable threats of legal action followed by a lawyer’s letter…

In an email exchange (15 Feb 2021) Grenier agreed remove the bogus medals from his group and send us a before / after images, the quid pro quo – SVC would have published those pics on our media platforms without any identifying information and Grenier could have carried on with his veteran support activities.

However, Grenier made the decision not to send us the images that he had previously agree to, furnished a picture of his cut and subsequently threatened taking legal action action against us. Note the cut on the left has 6 medal ribbons attached and the most recent version on the right has just 4 – the PG&K and QDJM ribbons have been removed. 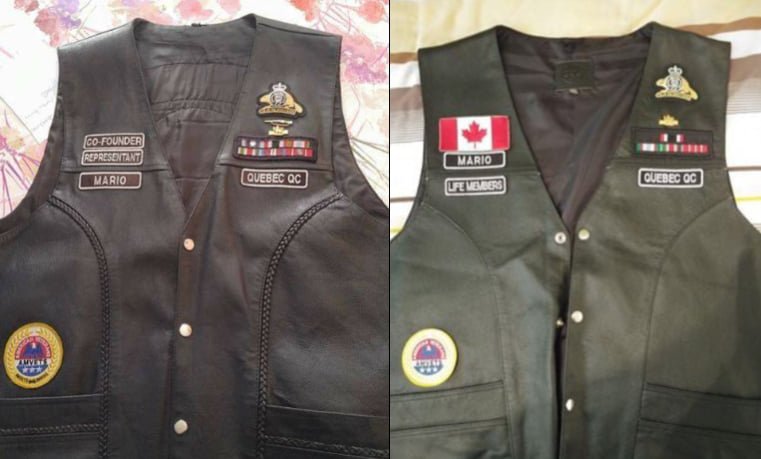 When SVC published the details of Grenier’s medallic fuckery ™️, he very quickly posted on his FB page that he had taken the two medals down as he didn’t know he couldn’t wear the British ones… You know, the medals that he said he received in the mail in 2012 as witnessed by his buddy Pierre.

So, where was Grenier during the Sept 1990-March 1991 time frame? He wasn’t in Doha, Qatar guarding our air force assets with Cie C 1er R22eR nor was he chasing Scuds with the UK Land Forces. Like everyone else, not deployed, he was probably watching events unfold on the 24 hour news channels. 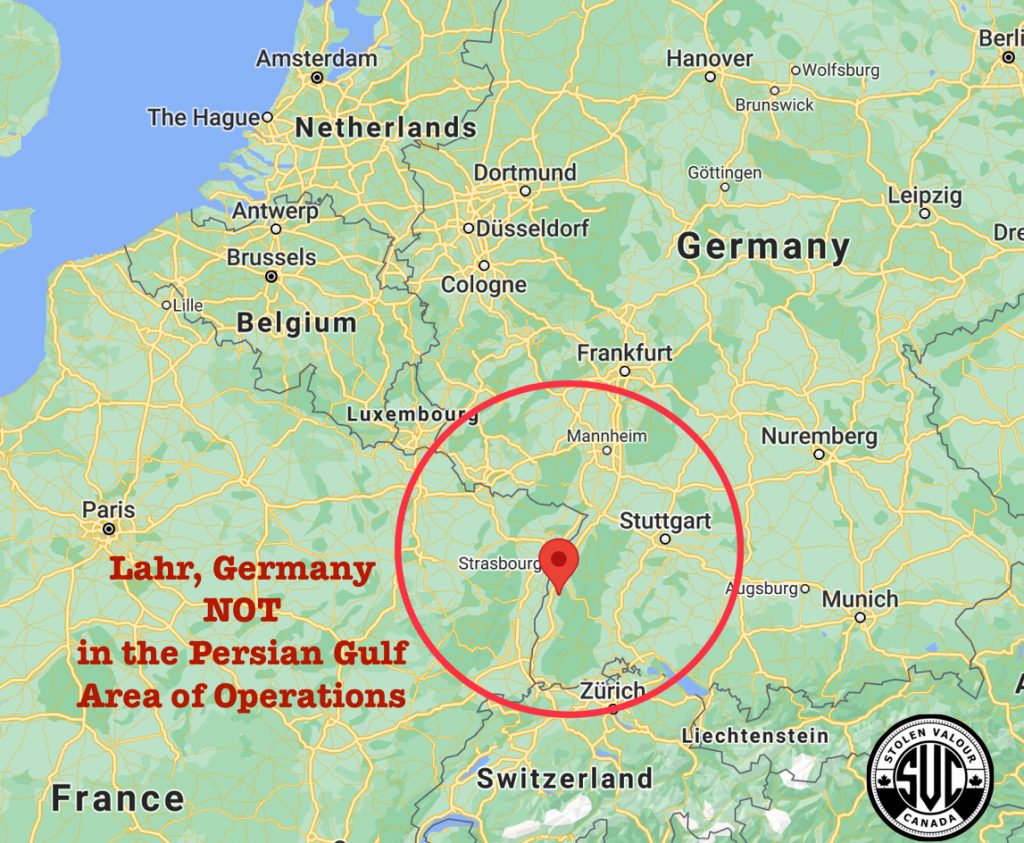 On 23 July 2021, Grenier posted up a pic of his revised group of medals with the PG&K and QDJM removed… 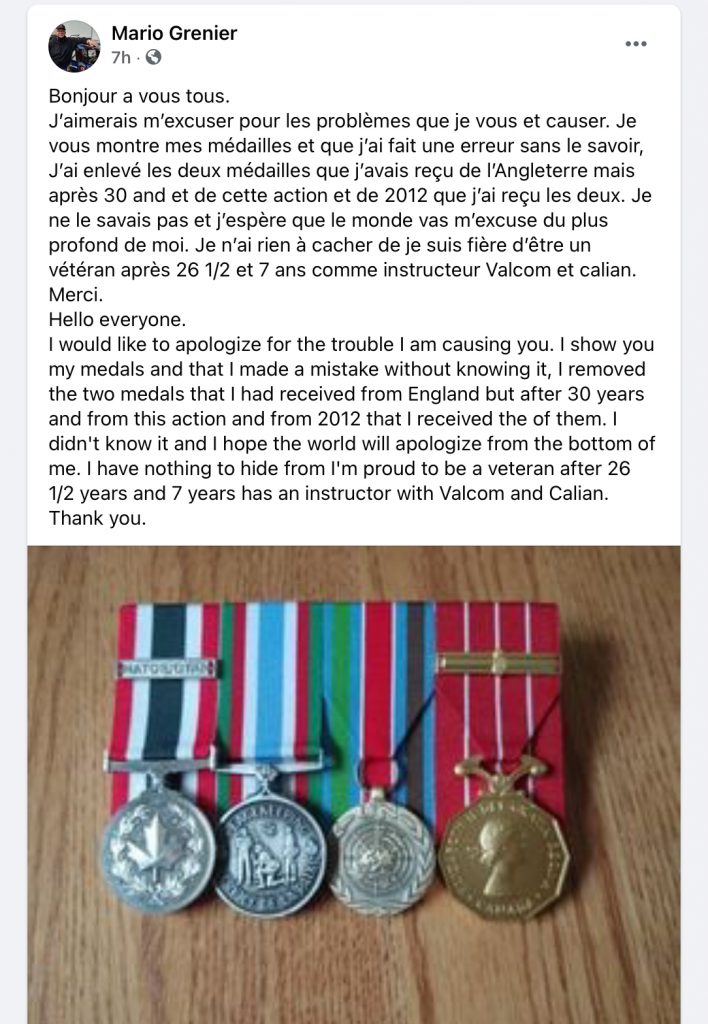 Now why would a recipient remove legitimately awarded medals? Could he not sought out the assistance of RHQ R22eR in confirming his Gulf War service and obtaining the official documentation / proof of his claims? 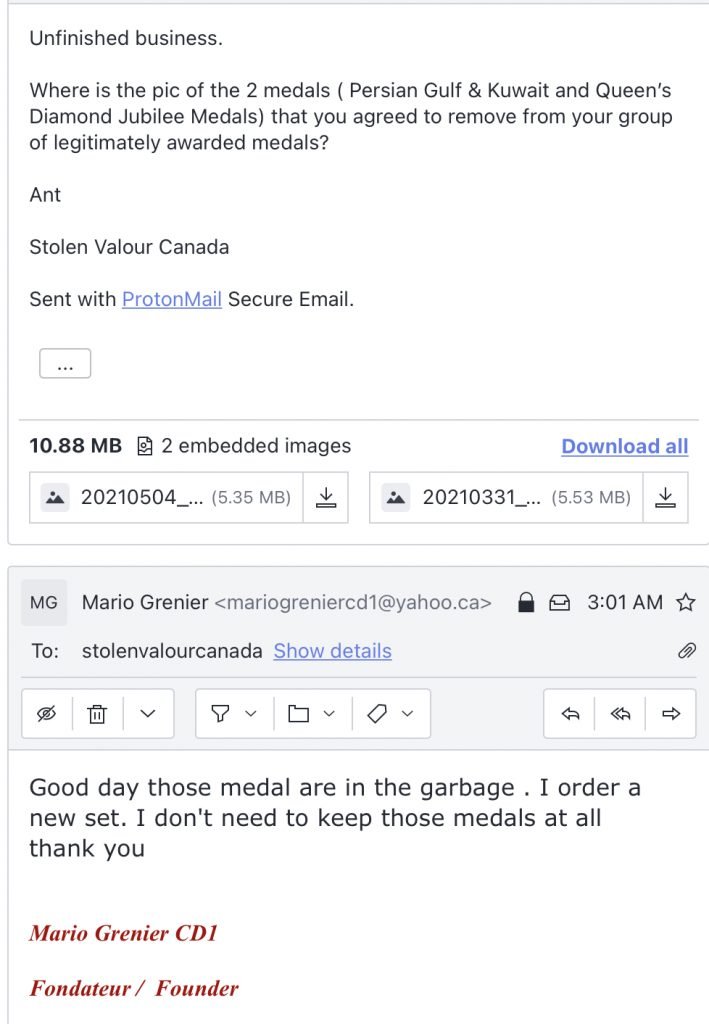 Why would he throw legitimately awarded medals into the garbage?

Mr Grenier was a Cold War infantryman who deployed to the Balkans. There was no need for him to embellish his military service but, he did…

It’s long past time for him to publicly apologize for claiming service in Persian Gulf, wearing two medals without any apparent lawful authority and quietly walk away from his military themed fairy tales.

Share this with your friends!
Posted in Embellisher, Gulf War 1.