I was dragged into that war,” says Surrendi. “I wanted to express the kind of situation a person can get into. It was terrifying in some cases, to be quite blunt.”

The wife of author Robert Mason (he wrote the award-winning book “Chickenhawk” about his experiences in Vietnam as a helicopter pilot) sent us (TAH) a message on Facebook about this creep, Dennis Surrendi.

According to Ms. Mason, Surrendi lifted nearly all of Mr. Mason’s book and inserted it into his own book “Set Me Free”, so I went looking around the internet for him and I found this article in the Nanton News about the author and his book. Apparently, as with Waverly Reynar, Surrendi was kidnapped and forced into the Vietnam War. I didn’t know that kidnapping Canadians is a thing. Apparently, when the Marines aren’t doing it, the CIA picks up their slack.

Of course, Mr. Surrendi had a skill set that no American would have;

Little did Surrendi know that the CIA was profiling students, and Surrendi — with a varied background that includes playing professional hockey for three years with the Detroit Red Wings and Chicago Blackhawks, is a neurosurgeon, has a masters of science in fish and wildlife management, a PhD in wildlife ecology and a PhD in human ecology — ranked high in the profiling, with his strengths in physics and chemistry.

“I fit into criteria for what they were seeking,” says Surrendi. “I got set up by the CIA through the University of Wisconsin, got drafted and couldn’t get out of it.”

Even though his name doesn’t appear on the rosters of the Red Wings or the Blackhawks, Surrendi swears that he played for them when he was 16, until he got tired of it and went to college at 19 years old, within a year or two, he was a neurosurgeon and he has several other degrees like two Master of Science degrees and two Ph.D. degrees in Wildlife Ecology and Human Population Dynamics and Ecology, you know, because neurosurgeon pay doesn’t go very far.

Anyway, the CIA kidnapped him and sent him to Vietnam to pilot helicopters against his will, because we can never have enough neurosurgeons flying our gunships.

He served as a helicopter pilot with the 229 Assault Helicopter Battalion in the 1st Air Calvary for about a year and a half before being reassigned to the 49 Aviation Company, 12 Aviation Battalion, where he served more than six months.

During his last nine months in Vietnam, Surrendi flew a Cobra AH-1 assault helicopter, which required that he obtain top secret clearance.

During his service in Vietnam, Surrendi received two purple hearts, the Bronze Star and Silver Star for bravery, and became one of the most decorated non-Americans in the Vietnam War. 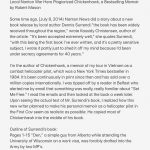 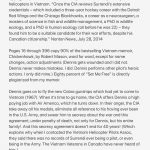 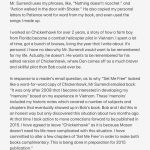 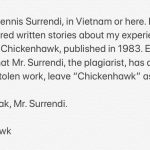 Robert Mason, “Chickenhawk”, was also in the 229th, see how coincidental that is? I can’t find the 49th Aviation Company, but Mason served in the 48th Aviation Company – he called it the 49th in his book and Surrendi fell for it.

Needless to say, Surrendi had to self-publish the book, because that’s how you publish a book that you lifted from a world-renown, award-winning book written by a real author. Mr Surrendi admitted that he was a poser and plagiarist to avoid any legal action, then he died…