Leonard came to the attention of Stolen Valour-Canada (SV-C) when we were asked to comment upon photographic images of him attending military and veteran oriented ceremonies in the Greater Toronto Area of Ontario. According to multiple sources, Leonard claimed to be a long serving Military Police member who was wounded in action during combat operations in Kandahar in 2003. He also stated he had completed deployed operations in Cyprus and in the Balkans where he witnessed ethnic cleansing and due to the rules of engagement, he was left powerless to intervene.

SV-C conducted a thorough review of all available records including websites, newspaper articles, photographic images, searchable data bases of medal recipients and extracts from military documents in Canada in order to determine the legitimacy of his claims.

The first document we uncovered was the newsletter of Region 2 Canada of the International Police Association dated March 2016. The lead article titled “A Military Veteran’s Personal Journey with Combat-Related PTSD” is a most amazing story detailing the life of a wounded veteran suffering the effects of a penetrating head wound/traumatic brain injury and PTSD. He details his struggle from emerging from a comatose state after aeromedical flight to Canada, his long term rehabilitation and the positive impact a service dog had on his daily life… 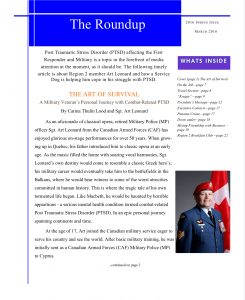 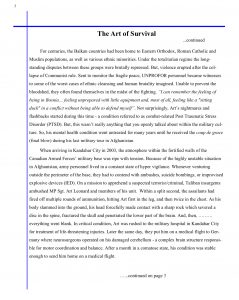 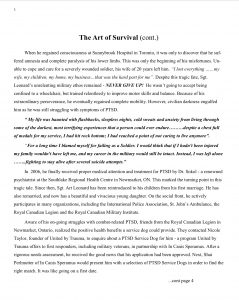 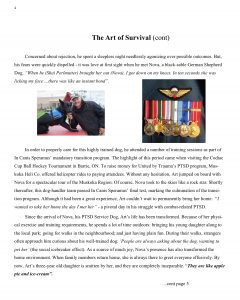 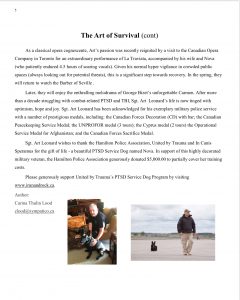 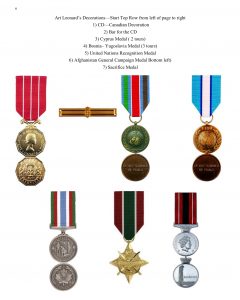 Unfortunately, his narrative doesn’t match the time line! The first red flag, claiming to have been wounded in action in Kandahar Province in 2003 and, taken to the “military wing” of Mir Wais Hospital in Kandahar City. Anyone who knows of Canada’s experience in Afghanistan, will realize that “MP Sergeants” weren’t in Kandahar Province during that time frame nor were they tasked on missions to arrest criminal/terrorists! In fact, Canada’s main effort was taking place in the Kabul area until December 2005!

Coalition casualties, would have been treated at the then US lead Combat Support Hospital located on Kandahar Airfield… The description of his injuries is amateurish at best, and his story of being held in comatose state for 30 days in a German hospital is a complete fabrication according to individuals who were intimately involved in the movement of wounded Canadian Forces personnel by aeromedical evacuation resources during the time frame!

Secondly, the medals pictured in the IPA article do not match the medals he is wearing, Leonard claims to have served 3 tours in the former Yugoslavia under a United Nations mandate yet, he wears the NATO medal… The article states “Sgt. Art Leonard has been acknowledged for his exemplary military police service with a number of prestigious medals, including: the Canadian Forces Decoration (CD) with bar; the Canadian Peacekeeping Service Medal; the UNPROFOR medal (3 tours); the Cyprus medal (2 tours) the Operational Service Medal for Afghanistan; and the Canadian Forces Sacrifice Medal [Canadian equivalent to the Purple Heart Medal]”

In his own words, “ My life was haunted with flashbacks, sleepless nights, cold sweats and anxiety from living through some of the darkest, most terrifying experiences that a person could ever endure………despite a chest full of medals for my service, I had hit rock bottom; I had reached a point of not caring to live anymore”. “For a long time I blamed myself for failing as a Soldier. I would think that if I hadn’t been injured my family wouldn’t have left me, and my career in the military would still be intact. Instead, I was left alone ……..fighting to stay alive after several suicide attempts.”

Aware of his on-going struggles with combat-related PTSD, friends from the Royal Canadian Legion in Newmarket, Ontario, realized the positive health benefits a service dog could provide. They contacted Nicole Taylor, founder of United by Trauma, to enquire about a PTSD Service Dog for him – a program United by Trauma offers to first responders, including military veterans, in partnership with In Canis Speramus. In support of this highly decorated military veteran, the Hamilton Police Association generously donated $5,000.00 towards the costs of training a service dog.

Leonard was a member of the Canadian Armed Forces from 1981-1986. He completed recruit training, was a Naval Ops tradesman for a period of time and then re-mustered to the Military Police. He was posted to CFB Chatham NB where his claim to fame was ticketing the Base Commander’s staff car during an alert!
On completion of his Regular Force service he joined the Reserve Force where he failed to achieve any further occupational / operational training or be promoted beyond the rank of Private.

Leonard’s tales of multiple overseas deployments and being Wounded in Action are a complete fabrication, and he has absolutely no entitlement to any of the the medals he sports! It’s SV-Cs opinion that Leonard is likely committing an offence under s419 of the Criminal Code of Canada – “Unlawful use of military uniforms or certificates”. An offence that several individuals have been recently tried and convicted in Ontario including Clayton Donoghue, Franck Gervais, Donald Lemmond & Eric Janssens.

His reprehensible actions, particularly the wearing of the Sacrifice Medal are yet another example of why Stolen Valour claims are so outrageous and injurious to those who actually served. Leonard made a choice to stand in the blood of our wounded and fallen, and for that he should pay a significant price!