A number of individuals contacted us regarding an Ottawa area man who claimed to be US Army Vietnam veteran. 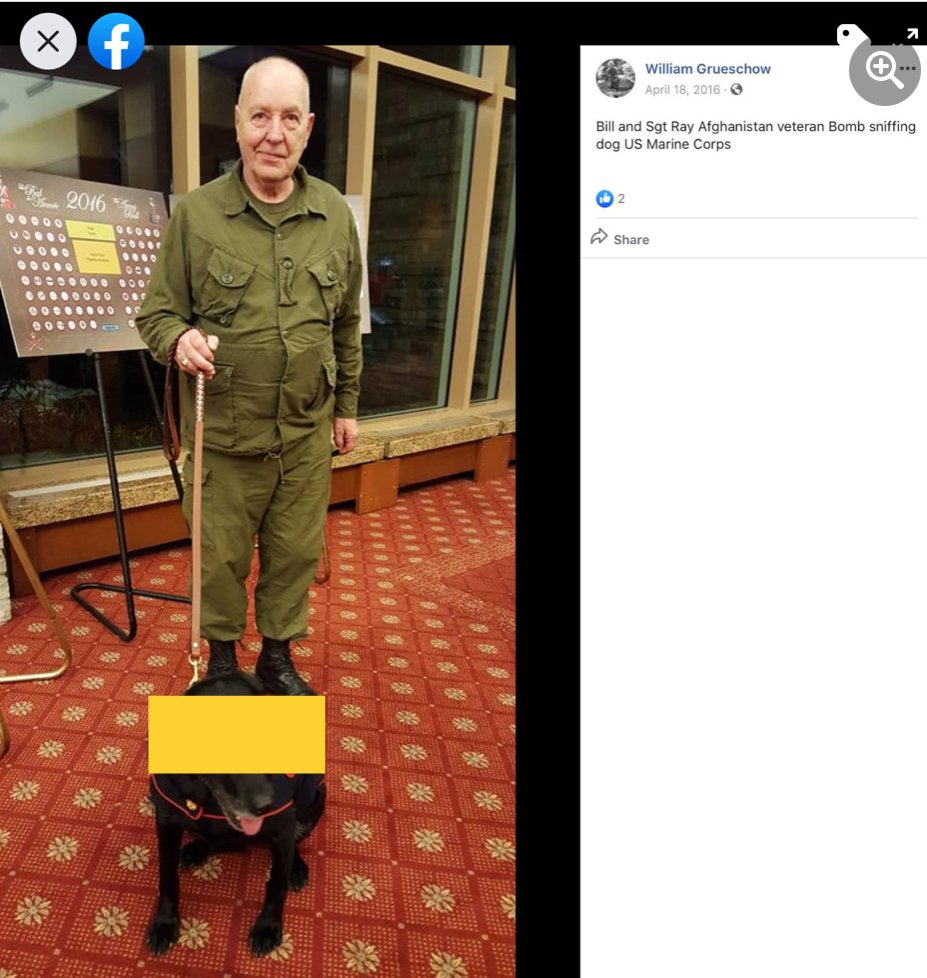 We also conducted reverse image searches of his supposed service in Vietnam. Most of the images have been pulled directly from the interwebs including a picture of Australian soldiers, one of them carrying a FN!

Greuschow has fooled many good people with his claims of service with the US Army in Vietnam.  However, to be truly convincing, it takes more than an ill fitting uniform, store bought medals, images lifted from the interwebs and tales of heroism on the field of battle. To an untrained eye, he looks like a legitimate veteran but, it’s a lack of attention to detail / lack of knowledge that indicates that he just followed a precedence chart when he went shopping on-line. 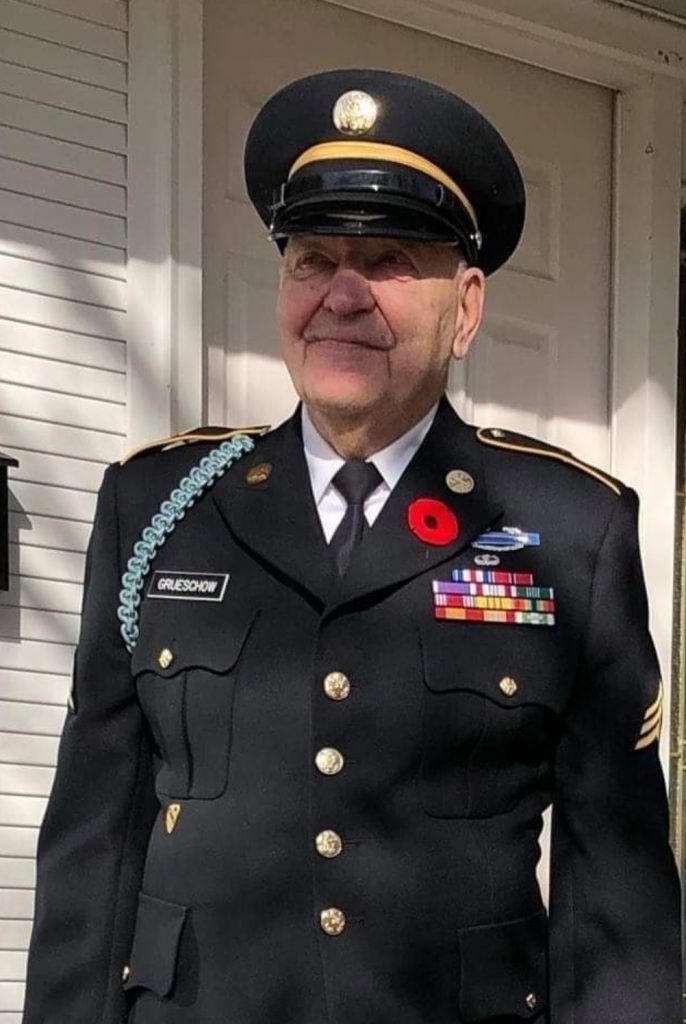 The complete lack of distinguishing devices on the ribbons (campaign stars, V for valour, oak leaf clusters) is a red flag as is the inclusion of the Defence Meritorious Service Medal (DMSM) in his group. The DMSM wasn’t created until a decade after his claimed service and there is no retroactivity.

In a number of images, he’s wearing the medals / undress ribbons and insignia of a US Army Sergeant including the Silver Star, Bronze Star, the Purple Heart, indicating being wounded in action, and the Combat Infantry Badge. Those particular awards are specifically named in US Stolen Valour legislation. Grueshcow is wearing the Army Service Uniform (Blues) that was adopted in 2008, nearly 40 after his claimed service was over! US Army regulations state that “retiree” must have completed 20 years of service in order to legally wear the uniform.

If you ask nicely, he’ll show you a Silver Star certificate detailing his heroism during the Battle of Ia Drang dated 20 November 1965. Unfortunately, he’s not listed on the roster of 1st Bn / 7th Cavalry during their service in Vietnam, http://us7thcavalry.com/1-7-vn/   Nor is he listed as a recipient of the Silver Star (Sterner list) https://valor.militarytimes.com/ 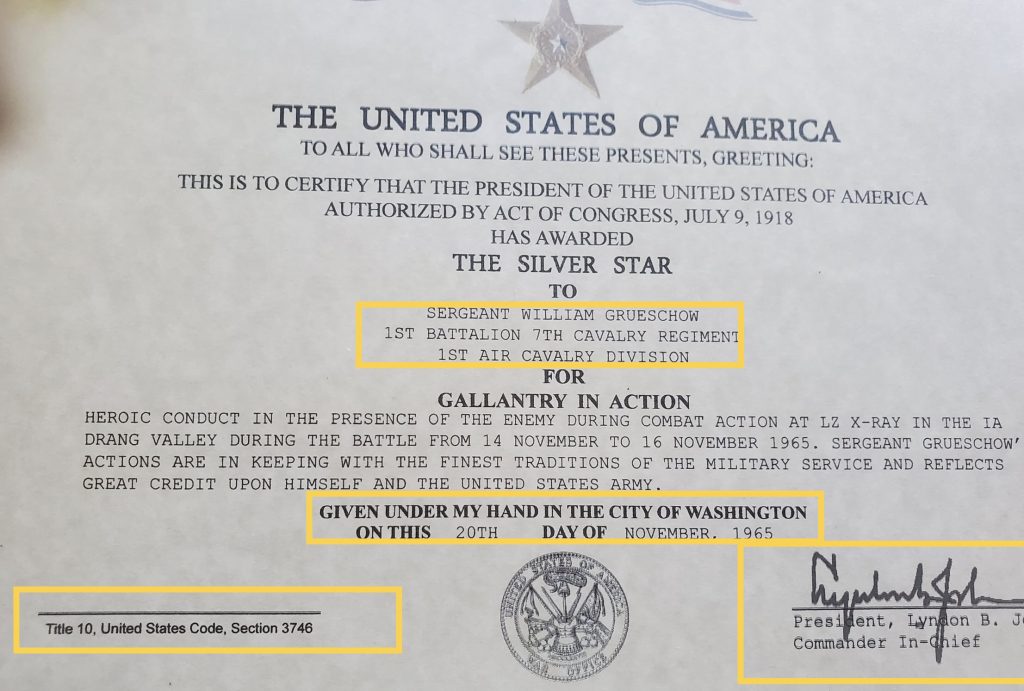 Now, there are a couple of issues with the certificate he uses to back up his claims, there is absolutely no evidence that Grueshcow has any US Army service so, he was never a Sergeant in the 1st/7th and the President of the US didn’t sign off on Silver Star awards.

Nor is he named in the Interim Report of Operations, 1st Cavalry Division RVN July 1965 – July 1966. 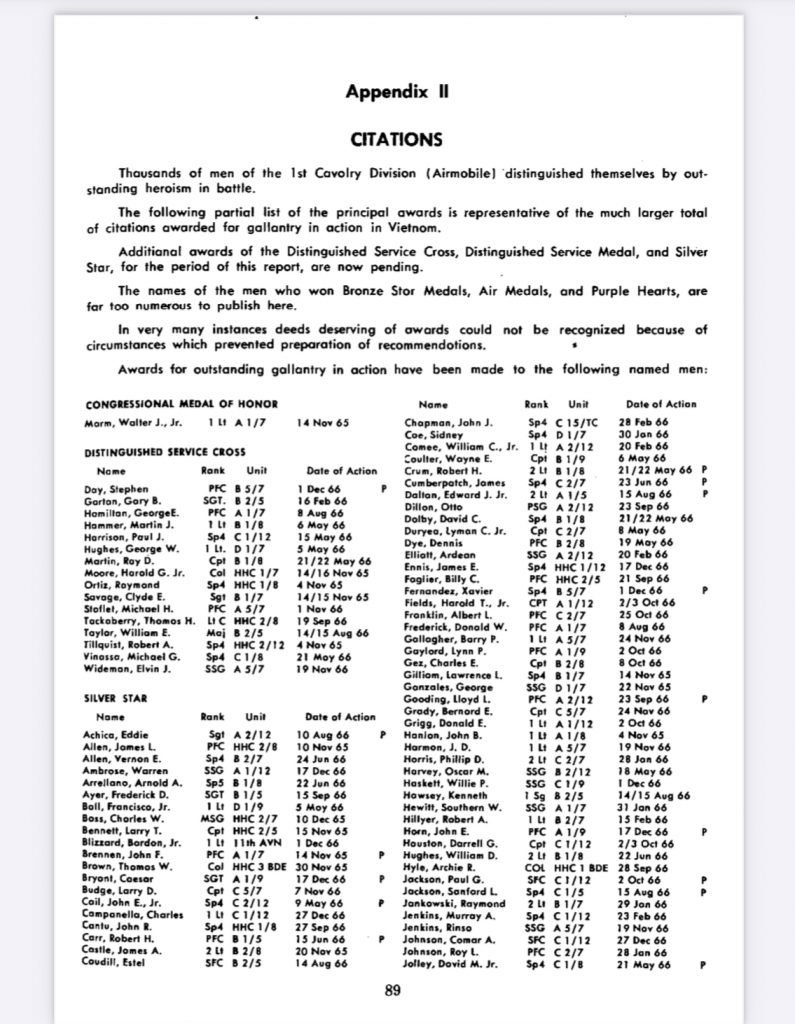 The National Defense Service Medal (NDSM) is an automatic award to all US Military personnel upon graduation of basic training in a time war, it’s the first medal they receive and he doesn’t include in his display.

He can either contact us and we’ll happily assist in determining his truths or, he can immediately apologize for his actions, surrender the bogus items for appropriate disposal action and just fade away…